Guest post by my Dad, Nathan Simons. Thanks, Dad, for writing and being an amazing Grandpa to our boys. 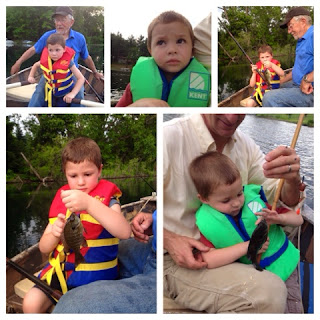 It is probably a common Grampa dream (actually it’s probably a common Daddy dream first) –taking your grandsons fishing for the first time. Well it happened last week. Courben and Judah were in Lakes Country in northeast Indiana visiting and we planned a fishing trip. I knew just the guy who could help. So I called my Uncle Ed who loves to take people…and even little kids…fishing.

It was a fine evening on Lake Minifenokee (it’s a made-up name for a made-up or man-made lake). The breeze was slight and the mosquitoes were not biting. But the fish sure were. As we rowed to Ed’s pre-scouted fishing spot, Judah worried a bit about falling in with each shifting of the boat. He sat beside me as I tried to reassure him that if he fell in that the lifejacket would keep him afloat. As it turned out I discovered that he was afraid of falling in and getting eaten by a fish…Doo-doot, Doo-doot, Doo-doot (think 1976).

We dropped anchor and Judah settled down. My uncle and I baited the hooks of two cane poles with beemoths (“What are ‘beemoths’?”), tossed the lines into the water, placed little hands around ours and told the little ones to watch for the bobbers to move. And move they did. Courben caught the first fish with his great-great uncle’s help. The fish came flying out of the water and smacked me in the nose. It was a “keeper” so into the bucket it went. Courben caught several more and then Judah and I got the hang of four-handed fishing. More fish in
the bucket.

Courben and Judah got so good at watching those bobbers dance and setting the hook, we let them try fishing solo. Well, needless to say, more fish ended up in the bucket! Twenty-two bluegills got tossed into the bucket before calling it quits on account of…my bedtime (the little guys were not done yet). Uncle Ed rowed us back to the dock and Courben even tried his arm at maneuvering the oars.

We thanked Ed…he said it made him feel young again.

The story’s not done. We invited  Ed and Aunt Nancy over the next night for a fish fry complete with salad from the garden, sweet potato fries and strawberries (also from the garden) and shortcakes topped with ice cream. Of course we told fish stories. Really, you should have seen the one that broke my pole. It must have been this big!